The SV Festival - A place for great conversations and inputs

At the beginning of the summer, YouCount Denmark participated with our young co-researchers in the SV Festival. A local music festival with space for knowledge sharing and negotiation of ongoing projects. Being a part of the festival opened discussions about how to create a more sustainable and inclusive South Harbor, Copenhagen.

The process and preparations behind the SV-Festival

In a collaboration between YouCount Denmark and Københavns Åbne Gymnasium, we worked with high school students who acted as young co-researchers throughout 17 modules. The youth has helped identify and analyze complex problems in South Harbour relating to sustainability and social inclusion and developed innovations to solve them.

How can the youth ensure that the citizens take them seriously and be open to their ideas on sustainability? What can you do when you feel completely lost in your part of town? What can we do to make the South Harbor a pleasant and safe place for youth?

After 17 modules of work, the ideas were presented to citizens and potential stakeholders at the SV Festival to enable negotiation and further development. The innovations were represented at the festival through movies the co-researchers had developed.

The SV-festival – Time for inputs and conversations

We tried to create a space where it was easy and accessible to showcase and talk about the project, the ideas, and the findings of the co-researchers. The citizens participating in the festival could easily contribute ideas and concerns to the youth co-researchers' creations by writing down their thoughts and sticking them to boards representing the different innovations (see photo 1).... 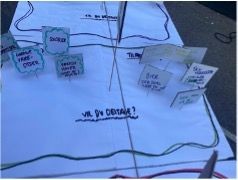 Furthermore, several posters were designed to invite the audience to investigate and understand the process of the youth from the beginning to the end.

While the audience walked around the posters and looked at the youths' innovations, the youth people engaged in conversations with the curious ones. Conversations with the audience enabled the youth to be heard by people who already lived in the area and were interested in their ideas (see photos 2 & 3). Many of the dialogues were exciting and rewarding; to topics of the dialogues expanded from creating spaces for greenhouses with green roofs to the importance of keeping the old fishing dock to secure livelihood and diversity in the area.

Photos 2 & 3: The photos show some pictures of the posters and the atmosphere of the co-researchers interacting with the local community.

The ending of a great day

After many well-informed dialogues and a great job done by the co-researchers, we ended the day by enjoying a beer and listening to the music at the festival.

Are you interested in seeing more pictures from the event? In that case, you are more than welcome to check out our Instagram @Genskab_sydhavn, where we've created a highlight called "SV-festival."